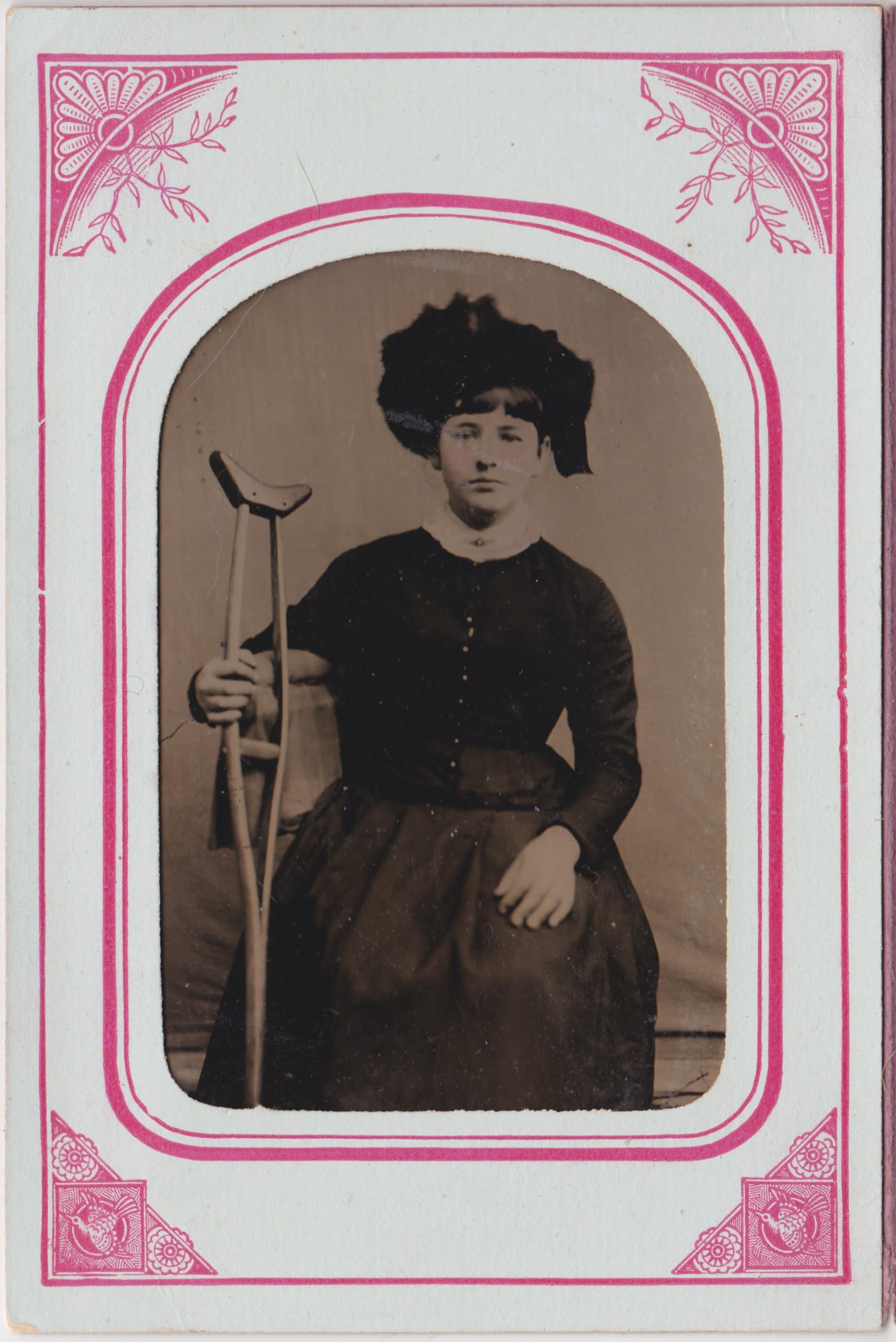 Writing on a spring day in 1862 during the Civil War, a woman possibly named Miss Helen Lilley, wrote to Peater [sic] James at Eastern State Penitentiary in Philadelphia that she would “do anything under heavens for [him].” She continued—and this is where I got more interested:

“so my dear you want me to show you My leg is that all I can do for you I agree at once but love I have one thing to tell you that is this I have one wooden leg but it don’t spill [probably spoil] my feger [probably figure] at all for you can not till [tell] it when I git my hoops [probably hoops, as in hooped petticoats] on I am quite a hand som looking dame for I bought a nice set of teeth before I came here which improves my buty very much so my dear if you agree to marry me I wont ask you to do any work only scrue [screw] my leg of[f] and put it on…” 1

The letter was possibly ferried to its intended recipient by Elizabeth Velora Elwell, another woman who had been incarcerated at Eastern State Penitentiary and who coordinated what one historian called an “illicit mail ring.” 2 You can read the letter for yourself, as it has been digitized by the American Philosophical Society. 3

What We Can Do with Disability Histories

I did not come across this letter by happenchance, and I was not pursuing this research on a whim. I was on a mission.4 I study the material culture of disability in early America, so I had to check out the letter for myself after my husband told me about it. I think the letter has made it into a few footnotes, but it hasn’t played a big role in any of my work so far. Though I first read the letter in 2015, I have now come to see it—and another one written nearly 100 years later—in a different light.

For me, this letter adds to the substantial body of evidence speaking to the commonality of physical disability in eighteenth- and nineteenth-century America.5 I am fascinated by questions such as, what was the lived experience of disability? How did disability contribute to, detract from, or complicate beauty and fashion ideals? And, where were people with disabilities in everyday life? 6

For example, you can see in this mainstream fashion plate from the May 1862 issue of Godey’s Lady’s Book why having an artificial leg like Lilley’s would have been difficult to detect underneath floor-length skirts that stood out from the lower portion of a woman’s body.

Despite evidence like the Lilley letter, many people I meet are surprised to learn that disability was common and often highly visible in early America. As an abled bodied person, I might not know this had my research not converged on disability history. I first got interested in this field when researching close stools, or toilets, in early America, and later needlework used and distributed by Anne Warder (1824-1866), who was chronically ill.7 I research, collect, and interpret this history, especially focusing on 1700-1840. This research is important in and of itself. But learned I can use this history to effect change in the present, something an audience member suggested to me was missing from a talk about the material culture of gout I gave nearly ten years ago now. At the time, I had no idea how I could possibly make a difference in combating ableism (a term I don’t even think I knew then). Now, I consider this work as important as the historical research and interpretation I do.

We aren’t the first historians and advocates to run into this issue (or opportunity!), though. Enter Dr. Gruber.

The Saga of Dr. Gruber

As I looked through this set of papers featuring the letter I came to see, I noticed more modern letters alongside the mid-nineteenth century ones. I nearly set them aside to move on, but I decided to take a quick look. That’s when I became quickly engrossed in a saga that we might call “Dear Dr. Gruber,” after the salutations that open many of these the mid-twentieth-century letters.

Of course, I almost overlooked these letters due to my focus on early American history. They tell a story in which Dr. Jacob W. Gruber (1921-2019), who established Temple University’s Department of Anthropology in 1964, tried to publish an essay. It was to be about the 1862 romance between Elizabeth Velora Elwell (who was white) and Albert Green Jackson (who was Black) that you can learn all about through the letters that were found alongside Lilley’s. Gruber started with American Heritage and tried again with Harper’s Magazine in 1956.10 Both submissions met with rejection. But Gruber had sympathetic colleagues. Edwin B. Bronner in Temple’s Department of History took the liberty of sharing the story with a colleague at The Pennsylvania Magazine if History and Biography. The editor, Nicholas B. Wainwright, responded:

“I have read Mr. Gruber’s paper with curiosity and occasional disbelief – surely the girl was joking in her references to her wooden leg and new set of teeth! Well, maybe not, but I am skeptical…I don’t know what advice to give Mr. Gruber about his story. Aside from its bizarre impact, the story does not contain enough value historically for us.”11

I can practically feel the pangs of rejection on Gruber’s behalf.

We all know—and I hope Gruber did too—that he was ahead of his time. It turns out that these letters do have historical value. But disability history as a field didn’t really take off until the 1980s and 1990s. The April 1956 issue of The Pennsylvania Magazine of History and Biography, which would have been out when Gruber wrote his letter, featured articles such as John E. Pomfret’s “The first Purchasers of Pennsylvania, 1681-1700,” and book reviews for tomes such as Robert Allen Rutland’s The Birth of the Bill of Rights, 1776-1791. No doubt important contributions to the field of history, these articles nevertheless indicate a focus on elite white men and their politics that dominated the era’s scholarship. We now know that historical value has a much broader definition.

Years passed. According to his Wikipedia page, Gruber practiced archaeology in present-day Old City Philadelphia, as planners and their allies decimated parts of it and reshaped others. Gruber didn’t need this publication for his career. But I suspect he kept thinking about it.

Additional letters in this cache suggested Gruber finally got this story published in 1965 in the Germantown Crier. This was a decade after he made his initial inquiries and was thanks in part to some advocating by his Temple colleague, Negley K. Teeters.12 Teeters and Gruber shared some interests. Teeters’ studied criminology and co-authored with John D. Shearer, The Prison at Philadelphia, Cherry Hill: The Separate System of Penal Discipline: 1829–1913 (New York: Temple University Publications by Columbia University Press, 1957).

When I first went looking for Gruber’s article, The Crier was not easily searchable online. I even sent Gruber (who died in 2019) an email asking whether he ever ended up publishing about these letters as one letter suggested he had. A family member graciously answered that it was unlikely. But I didn’t think Gruber would have let this go. So I got in touch with the Germantown Historical Society and was delighted to find that Gruber had, in fact, published “Prison Romance” in a 1965 issue of the Crier. He wrote about the relationship between Elwell and Jackson, but left out the artificial leg in the letter quoted above—perhaps because it is unclear whether it was written by another woman (not Elwell), perhaps for other reasons.13 One letter from Edwin Iwanicki at the Germantown Historical Society mentioned removing some of the quotations from the manuscript.14 Did Gruber or an editor leave out this part of the letter because it was extraneous to the story or because it still seemed too far-fetched or lacking in historical value? We may never know.

Historians have brought to light new stories and expanded our understanding of marginalized people associated with Eastern State Penitentiary, which is now a widely respected historic site. Rebecca Capobianco, for instance, has written about (as luck would have it, in The Pennsylvania Magazine of History and Biography) the letters between Elwell and Jackson as well. As Capobianco points out, the love letter exchange that makes up the bulk of the correspondence found with the one that interested me is incredible in its own right. As Capobianco notes, communications within the prison among those incarcerated there were prohibited, and the letters also document two people engaged in an interracial relationship in the middle of a civil war over upholding slavery and a racist system of oppression in the United States.15 And Annie Anderson, a staff member at Eastern State Penitentiary, has also done a wonderful job highlighting previously marginalized stories such as those of the LGBTQ community for public audiences, most recently during the COVID-19 pandemic using the Twitter hashtag #HiddenESP.16

Jacob Gruber may not have thought he was doing disability history, but he saw the historical value in it before many others did. We have a lot of work to do, but I am glad we have more spaces and places to tell these not-so-hidden histories today and to use them to make public culture and public life more accessible and inclusive.

–Nicole Belolan is the Pubic Historian in Residence at the Mid-Atlantic Regional Center for the Humanities at Rutgers University-Camden where she is the Co-Editor of The Public Historian and the Digital Media Editor, both for the National Council on Public History, and the director of a continuing education program in historic preservation. She is currently working on an article about the visual culture of disability in early America and speaks often about making museums and other sites of culture accessible and inclusive.