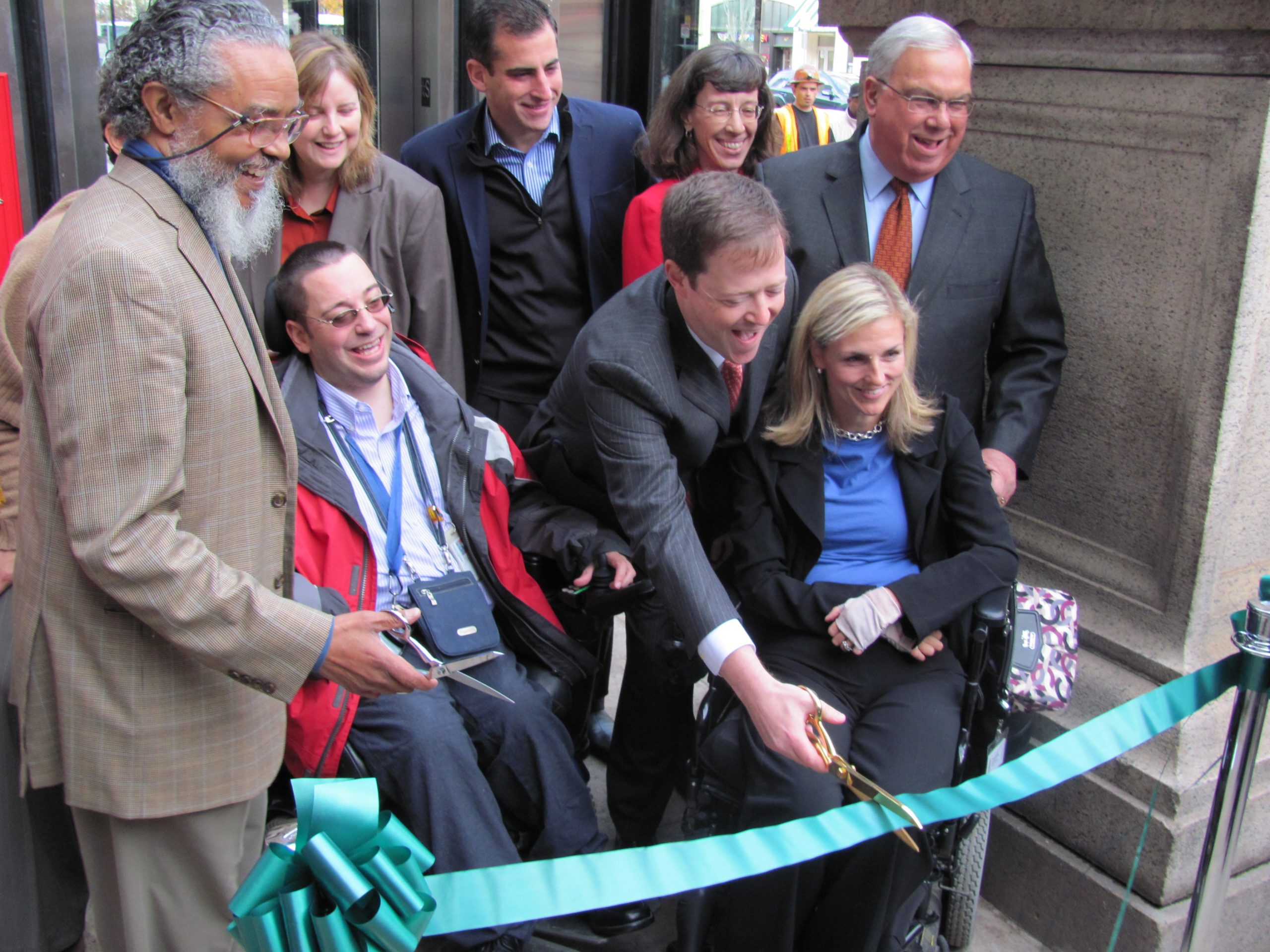 During the late 1960s and early 1970s, Ed Roberts, a post-polio quadriplegic established the first Center for Independent Living in Berkeley, California: an organization led by disabled people and committed to helping other disabled people live lives in the community.

Ed Roberts was born in 1939 and contracted polio when he was 14. The disease paralyzed him from the neck down and forced him to rely on an iron lung to breathe. Desiring to attend university, Roberts petitioned the University of California, Berkeley to allow him to enroll. When he was finally granted admission in 1963, he became the first severely disabled student to enroll—then graduate—from an American university. During his time there, he worked with other disabled students to fight for access: they established the Physically Disabled Students Program, which was run by and for disabled students, providing services “that would enable [students] to live in the community.” In 1972, Roberts and members of the program came together to found America’s first Center for Independent Living (CIL).

While the CIL was the first of its kind, there was no certainty that others would follow their lead in other cities.

In Boston, a small group of disabled activists who called themselves “the Council” were watching Roberts and the CIL. Charlie Carr, Fred Fay, and Elmer Bartels, shared Roberts’s goals. Soon after Roberts launched the Berkeley Center, the Council came together to discuss plans for setting up the second independent living center in the country: the Boston Center for Independent Living (BCIL).

Carr had a vested interest in independent living. At the age of 14, he became paralyzed below the neck after a diving accident.1 In a series of interviews, more than 50 years after the accident, Carr recounted what happened next. After spending months in a hospital, he was released and sent to the Massachusetts Hospital School in Canton, Mass. The Massachusetts Hospital was an institutional school which housed disabled children and kept them separate from their family and friends. When Carr graduated in 1971, there was no place for him to live independently so he was sent to another institution, the Middlesex County Hospital in Waltham, Mass.

The Middlesex County Hospital had a program called “Wellington Hall,” which was loosely modeled after the independent living center in California, but not led by disabled people and not integrated into the surrounding community. Still, there was enough freedom for Carr to begin working with others to create the prototype of what would eventually become the BCIL; because his every move was not shadowed by staff, Carr had the ability to be in contact with disabled activists outside the institute.

It was during this time that he met Fred Fay at the Middlesex hospital. Fay was a leading disability rights activist who played an active role in helping to win the passage of Sections 503 and 504 of the Rehabilitation Act of 1973, as well as the Individuals with Disabilities Education Act of 1975. Fay connected Carr with Ed Roberts, who offered guidance to the young activist.

Carr continued developing several plans in the late 1970s, including a draft of what would become a cornerstone of independent living in Massachusetts: the Massachusetts Personal Care Assistance Program (PCAP). The PCAP was a government supported program, allowing people to live independently by sending assistants to them rather than forcing them to live in institutions. The BCIL used this program to support their mission of disabled people living independently. Today, more than 60,000 people in Massachusetts benefit from Carr’s fight for personal care assistants (PCAs).

In 1974, the Council launched the BCIL, which helped disabled people find apartments, get PCAs, hold jobs, and lead lives. While providing direct assistance to individuals, BCIL also fought for the legal rights for people with disabilities. Carr ultimately ended up leaving after disagreeing with the Board’s choice of a non-disabled director. But he did not give up on the idea that centers for independent living could change the lives of people with disabilities.

In 1980, he founded yet another center, the Northeast Independent Living Program (NILP). Carr later recalled that the NILP, “was the first in Massachusetts to develop specific programs serving youth in transition to living with disabilities and providing IL [Independent Living] services to Deaf and hard of hearing consumers.” It also pioneered methods of offering services to people with mental illness. In the early 2000s, the methods created at NLIP were recognized as a national model by the World Institute on Disability.

Carr later became the Commissioner of the Massachusetts Rehabilitation Commission for the Commonwealth of Massachusetts under Governor Deval Patrick. He led the agency for eight years. Today, he continues to work as a policy advocate through the Disability Policy Consortium.

While Carr left the BCIL, the organization continued to fight for the equality of disabled people, becoming an established presence in Massachusetts. BCIL helped organize community events, including a festival in 1980 that brought together disabled and able-bodied people. The organization also held a major registration drive in 1984 to “increase the number of disabled voters.” And, in 1990, BCIL was an important supporter of the Disability Pride Parade, which was the first disability pride parade in America.

One of the most important issues the BCIL takes on are those relating to accessibility. In 2002, the BCIL filed a private class act lawsuit against the Massachusetts Bay Transportation Authority (MBTA) which was not operating in compliance with the Americans with Disabilities Act (ADA). The lawsuit outlined that there were not enough disability accessible train stations, T stops, and other forms of transportation. Elevators in subway stations were out of order and few buses had lifts for wheelchairs.

Four years after filing the lawsuit, the BCIL won, forcing the MBTA to invest more than $300 million in making the system more accessible.2 This has included not only physical improvements like working elevators and hundreds of new low floor buses, but also staff improvements like employee training for serving disabled riders. While improvements are still needed, as of 2020, every MBTA bus is accessible by a lift, and the number of elevators has increased by 98% since 2006.3

Today, the BCIL provides services for 4,000-5,000 people a year. They provide job training, assistance with forms, and rights training. The vision of disabled people living independently and serving their community is a now a reality, changing non-disabled perceptions of disability at the same time. Perhaps most importantly, as the second center of its kind in America, the BCIL helped prove that Berkeley’s center was not one-of-a-kind, leading to half a century of nationwide advocacy for independent living at 340 centers for independent living in the United States.