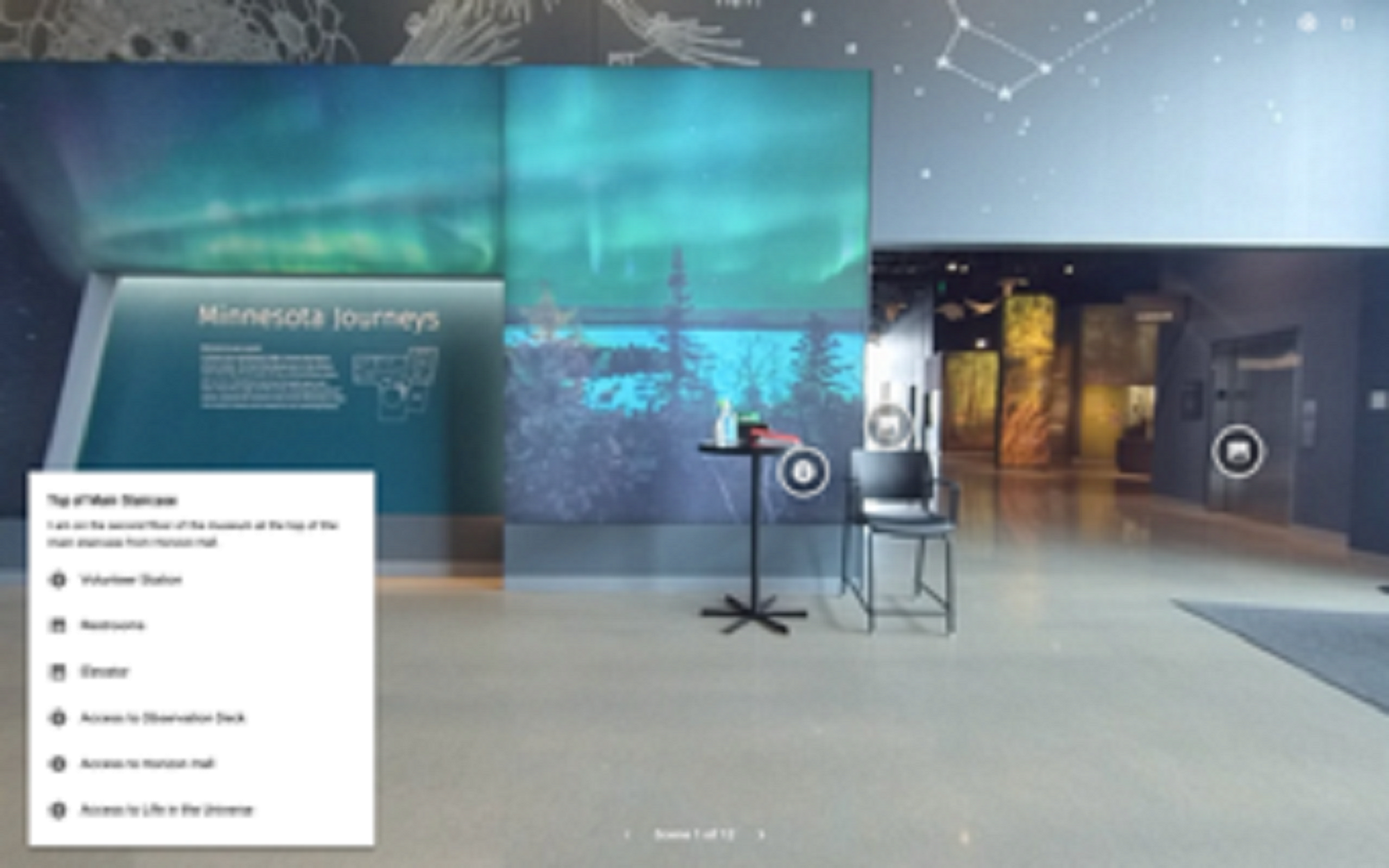 As I sat and waited for feedback on the tours to come in, I was filled with a nervous excitement.

The tours were an attempt at a new type of pre-visit resource for visitors with sensory sensitivities and/or who are on the Autism Spectrum. They consisted of 360° images of the local Bell Museum’s spaces, with additional information on general tips, sensory levels, and resources that were available. I created the tours to function as immersive, in-depth, interactive maps of the museum.

To find out if the tours were helpful, or even wanted, I included a round of testing and feedback from members of the disability community in my project (who were paid for providing their time and expertise). It was their feedback I was anxiously waiting for.

When the first review came in, all of my apprehension disappeared. The first participant responded, “This brought me to tears. Seeing this kind of preparation…I drive by the Bell Museum frequently and the not knowing has made it intimidating. I am so excited for this pandemic to be over and to be able to visit.”

Shortly after, I received this similar comment: “…the descriptions [of the tour] were clear and direct. It felt inviting. I’m very impressed & now excited to visit the Bell Museum which before felt unknown & intimidating.”

There was also a parent, who had visited the museum before, who echoed the other two: “This is a game changer for a kiddo like mine. She can plan visits, know where the quiet area can be found…I’ve visited the museum several times and this makes it come alive in a way a social story can’t.”

These participants validated and hit on the exact purpose of this project: to make the previously unknown museum space known. These tours provided a sense of familiarity, making the museum seem more approachable and alleviating anxieties of entering a potentially uncomfortable environment. People who were previously intimidated by the museum were now excited to attend.

Reflecting on the 30th anniversary of the ADA in conjunction with this project brings up an additional matter: with the increase of individuals being diagnosed with sensory sensitivities and/or Autism, what are institutions’ responsibilities to these folks?

When first creating this project I did not have the ADA’s anniversary in mind. Rather, it was developed in response to a prevalent need as the number of individuals with sensory sensitivities and/or Autism Spectrum Disorder (ASD) are increasing.

In 2018, the CDC reported that 1 in 59 children are diagnosed with ASD. In Ramsey and Hennepin Counties (the Twin Cities metro area), the Autism Society of Minnesota (AuSM) reported 1 in 42 children in 2018. When we apply these numbers to the Bell Museum’s attendance for the 2018 season, they saw over 5,500 children with ASD alone.

It is important to note that these numbers only reflect children and only reflect ASD. They do not include other sensory disorders or adult populations. Based on these numbers and taking the missing factors into account, it is safe to assume the Bell’s visitorship with these types of needs is actually much higher.

So what is the Bell’s legal obligation to these visitors? According to the ADA, not much. As long as people are not being discriminated against, and, “reasonable modifications to rules, policies, or practices,” are being made, the museum is good to go.

(I should note – the Bell museum is very active in looking how to move beyond ADA requirements. In fact, that is how I became connected with them. I interned for them over the 2019-2020 academic school year where I worked, learned, and developed alongside some incredible people who consistently challenge their institution be more accessible to their visitors.)

While the ADA recognizes discrimination and physical barriers, it lacks the recognition of environmental factors, which can be just as impactful on someone’s experience within a public space.

I can’t help but think back to the responses I received for my project. People were not attending the museum because of feeling intimidated by the unknown environmental factors they might face. By providing a tour that addressed some of these variables, such as lights, sounds, smells, movement, vibrations, interactions, etc. it made the space approachable. More equitable.

Anniversaries inevitably bring with them moments of reflection. As members of the sensory sensitive and ASD communities increase, institutions should use this moment to question if they are simply meeting standards or are making a true effort to push beyond what is required of them to fulfill the needs of their current and potential visitors.

Elisabeth DeGrenier created the 360° Bell Museum Sensory Tours for her final capstone project for the Heritage Studies and Public History master’s program at the University of Minnesota. This project was created in collaboration with the Bell Museum, AuSM, and members of the Disability Community. She believes that histories shouldn’t be told about or belong to a selected few, they should be accessible to anyone who wants to share or desires to know. She attempts to use her positions as a public historian, historic preservationist, and archivist to engage with communities in this way. She can be reached at  Elisabeth.degrenier@gmail.com